At the end of 2014 one of my dreams came true, when I have bought my first apartment which after staying in rented properties for ~8 years, I could finally call my home. Even though real estate prices were not as high as before 2008, they were still way too high for me, as I would never have enough courage to get into debt for 30 years… Instead I’ve opted for a loan with a period of just 4 years and have bought an apartment in a village 5 kilometers from Cluj-Napoca: Floresti.

Because the prices in this area will probably never increase in the same pace as the prices from Cluj, I tried to be frugal when it came to furnishing my new apartment, having in mind that if I will decide selling it at one point, I’m not sure I would recover the whole amount invested in it. Thus none of my smart home ideas could became reality. I was a bit disappointed, but later on I have found out about the Orvibo S20 smart socket that allows some level of home automation, is not too expensive if ordered directly from China and in case of selling my apartment, I can just unplug it and take it with me. 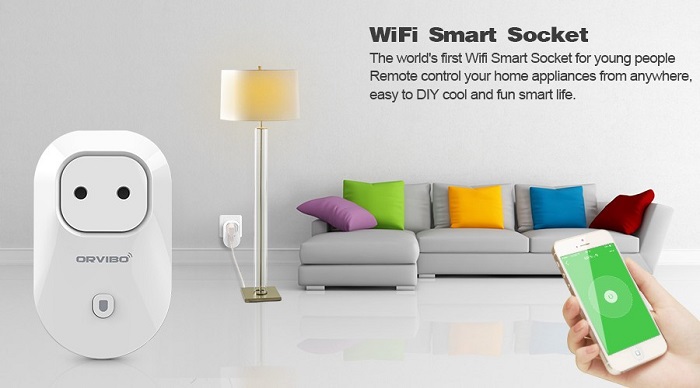 At the moment of writing this article I own only 3 such smart sockets, but I’m already happy with the level of automation I’ve achieved with them. One of them is used for the TV and the TV box, as I hate turning them on/off separately. Furthermore, the Orvibo smart socket is set to turn them off automatically each day at 22:05, except for Friday and Saturday, when we usually stay up till a later hour. Because I usually wake up at around 6:00 in the morning, this is a good reminder for me to prepare to get in bed.

Another smart socket turns my bedside lamp on at 22:00, so when the TV turns off, I don’t have to find my way in the dark to the bedroom. Then, when I finally get in bed and am finished with reading or surfing the web from my phone, I can turn it off manually without getting out of the bed.

The third socket is my favorite. It automates a little lamp mounted above the kitchen sink, which turns automatically on at 6:05 in the morning each workday and turns off by itself 20 minutes later. This usually gives me enough light in the kitchen and in the hall, so I only have to turn the lights on manually in the bathroom. This is my favorite, because it motivates me to jump out of the bed, get dressed, grab my breakfast and get out of the door before it turns off. Now this is great, because if I leave at 6:20-6:25, the traffic is ok-ish, but if I leave 5-10 minutes later, it’s just horrible and I can hardly turn left at the end of my street.

The only downside of the cheap smart sockets at the moment is that they cannot be used on IFTTT yet.