I’ve had it for more than 6 years and it was my best car so far. Only a few months have passed since I’ve ditched it and got a better/cooler/stronger car, but I already miss driving it. The only weakness it had was that it was a Dacia Logan…

It has no air conditioning, which meant that even short trips during the summers could get really painful. It has a 1.4 liter naturally aspirated petrol engine (~75 HP + 10% after the chip tuning :)), which was definitely not enough for a guy in his 20s… But despite these disadvantages, I loved it, I’ve bought it new and although I neglected it’s exterior, it was taken good care of, oil, filters and other consumables were changed in time and checked yearly if everything was fine with it. In the first 2-3 years when I was still living in Cluj I’ve only used it in the weekends, and used public transportation to get to my workplace, thus when I’ve donated it, it had only 60000 kms on board, which compared to the mileage of the SH cars brought from Germany is almost nothing. Moreover, in Cluj I’ve seen Logans used as taxis with well over 400000 kms.

The best part of it was the cost of the maintenance. Even though everything was done at the dealer I’ve brought it from, it was ridiculously cheap. Only when I paid the insurance for my new car did I realize how cheap it was for Döfi.

But then why did I ditch it? First of all, because I wanted a car that would be comfortable even for longer journeys, having air conditioning and a more powerful engine, so overtaking would not be an issue anymore. I would like to take longer road trips in Europe in the future by car and without these features, although totally possible, would be quite unpleasant.

Furthermore, I’ve been in a YOLO mood for some time and thought that I should own a nice car now, while still young and not when I turn 60 and would only use it for going to shopping. I’ve also had a great peer pressure from my colleagues who used to mock me saying that they do not know another developer in Cluj who stays in Floresti and drives a Logan. The final push also came from one of my colleagues who recommended a guy who brings cars for a reasonable price from Germany.

I’ve bought it for 7000 EUR in 2010 and I knew it had lost a lot of its value in those years, but I was very surprised when a SH car dealer in Cluj offered only 1700 EUR for it saying that it is quite a basic model lacking extras and toys. Well, f__k you in the @**, man! I was so upset I didn’t even reply to his message. I mean, I know it’s a low cost car, but in a pretty good shape, with relatively low mileage. I could have got 1200 EUR on it if I waited 4 more years and sold it for the state through the “Rabla” (old/rubbish/junk) program. Fortunately my parents were thinking about replacing the old family car, because it started to rust here and there and I was happy to donate it to my father than sell it for no money. 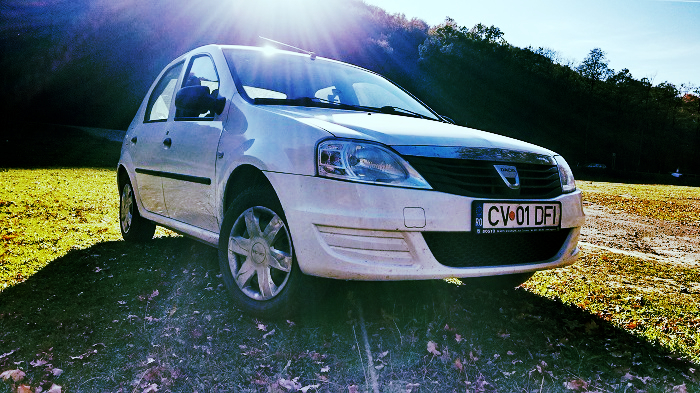 So Döfi is still in the family, still in good hands and I’m still able to drive it if I want to. Now that I was looking for some photos about it did I observe that it has done quite a bit of off-roading as well, I don’t really have any photos with it on asphalted roads. I already miss its affordability and reliability and also its image of a cheap car made for the poor and being looked down by the average. Its replacement – the Devil – is already causing a lot of headaches because of its complexity, although we could say that it is from the same family and even that is considered an affordable car.